Where do Babies Come From Mummy?... Ask Bridget Jones Darling!

I don’t remember the first time, but I do remember the most awkward time…
We were stood in a queue at the supermarket checkout, Millie lay in her pram chewing and slobbering on her Sophie Giraffe and Leo, who was five, was chatting away to her in his very best ‘grown up speaking to a baby’ voice, explaining to his little sister what the family plans were for the evening.
The store was busy and so were the queues for the checkout, it came to my turn and I started to load the convey belt with the shopping essentials I had in my basket, bread, milk, wine, juice, wine…. When it happened…. 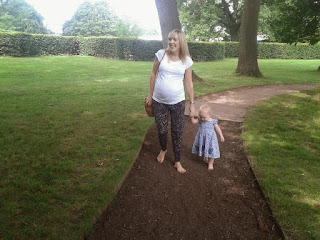 “Mummy?”
“Yes mate?”
“How did Millie get here?”
“Erm… She came out of my tummy,” I said, making eye contact and exchanging smiles with the lady on the checkout.
“How?”
“We will talk about it later mate.”
“You said that last time.”
“Did you have a nice day at school?”
“She’s too big to crawl through your belly button, so….”
I knew there were smirks on every single face behind me, at least ten people waiting to see how I would deal with this notable parenting moment.
What would I do? 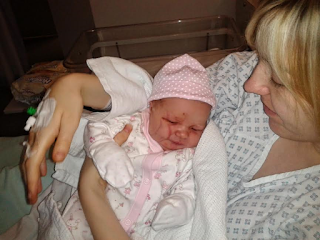 I could explain that Millie came into the world through my vagina but because of her big head she got stuck and the doctor pulled her out with a pair of massive pliers.
Or
I could say that she was delivered to the hospital on a cloud by a big bird.
Neither of which, I imagine would have my supermarket audience nominating me for the Sainsbury's Mum of the year award. So, I did what any jittery parent, with sweaty hands and a loathing of their child does. I pointed out the sweet counter and told him to go and choose whatever he wanted.
fter that incident, I promised myself I would always be honest with my children about everything babies, pregnancy, puberty related and all that jazz. I would explain it all in an honest, ‘age appropriate way’ (the way the perfect parent brigade explains everything to their little shits.) and never divert from any questions they have. And I always have done, not so long ago I had a conversation with Leo as we sat in traffic, he started to discuss puberty with me after a prompt from the radio, we had a fantastic conversation……. Until I did my best Gruffalo impression and told him that’s how he might start sounding over the next couple of years! - I laughed my socks off, my nine-year-old rolled his eyes at me, I cleared my throat and then composed myself.
So, I was on the ball, this mummy was on the ball with sex education…. Until earlier this week that is. Leo and Millie were watching that film, The Incredibles, when I went upstairs to clean (piss about for a couple of hours). I came back down to them watching Bridget Jones’s Baby as I walked through the door Bridget Jones’s doctor was making some comment to Bridget about the baby coming out of her vagina. (Leo obviously knew, Millie didn’t!)
By now I was thinking ‘shit, I’m a terrible mother’, I should have had a code on that bloody box, I should have made sure that I explained to Millie where babies come from before she had even heard of Bridget Jones and way before she was watching her give birth in her third film. But been a parent, as well as the usual crap, there is also a lot about damage limitation involved. So, I put on my damage limitation hat and decided to tell her the truth and answer her questions in ‘an age appropriate’ way.
Millie looked up at me,
“Did I come out of your vagina, mummy?”
“Yes, yes, out of my vagina” I was telling the truth, this was going well.
“So, I just grow in your belly and slide out of your vagina?”
“Erm yes that’s it!” I’m fucking lying, there is no way in the world you could call it sliding out.
“Is your vagina big?”
“Errrmmm” .........No fucking lying!
“Do the daddies slide the babies into the vaginas?”
“Errrmmmm………..”
**** Hyperventilates and look for the remote***** "Who wants cake??????"
The damage limitation didn’t go well! In fact, it was shocking! But having spent years, not worrying, 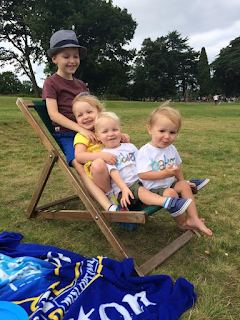 but certainly thinking about how and when I would talk about where babies come from to my kids, and not quite sure that I said the right things to Leo. Watching Millie’s reaction was reassuring and taught me again something I already knew, kids don’t give a shit they like the facts and that’s about it, they’re not hung up on the details of everything like us adults are. And although, I now have a four-year-old who knows more about child birth than me thanks to Bridget Jones and a nine-year-old who has figured out he only needs to mention certain words and I will be offering up cakes and sweets like I’m Willy Wonka. I’m pretty sure I’m still winning this parenting game, babies, sex talks and all.

So, what am I going to do when Max and Bobby start asking where they came from, I hear you ask.
Bring out Bridget of course!
Posted by Kerry Shaw Mummy of Four at 07:43