Summer has nothing on September!

This week the summer holidays came to an end. The beginning of the summer brought out my sentimentality and emotional speeches, declaring how delightful starting nursery school was going to be for Millie, how proud I was of Leo who would be going into year four and how much I was looking forward to spending quality time with all four of my gorgeous children. The reality is that the long six weeks of the summer has knocked that sentimentality right out of my mouth.

Of course it's still delightful that Millie has started school this week.

It's delightful that Leo went back to school.

I was delighted, ridiculously delighted.

I was practically skipping out of that school gate quicker than Millie charged in!

My plan for the summer I imagine echoed every parent's plan who were happy lucky enough to spend six whole weeks with their kids, Fun, Fun, Fun!! What could be more fun than a soft play area even if it meant the place was packed to the roof with screaming kids, the weekly food budget being spent on aluminous coloured icy drinks and burgers that even the crappiest cooks among us would be ashamed to serve up. Having to jump from my chair every ten minutes to locate my children because I just knew that the one time I didn't jump up to check where they were, they would of being abducted by a psycho who had sneaked into the area disguised as a parent! Then finally having to cut my visit short because my three year old 'accidentally' pushed in line for the slide and the kid she pushed in front of  was crying to his angry looking mother who looked like she could last a few rounds with Mike Tyson!

After one to many stressful soft play dates we decided we would stick to outdoor activities. Which have been fun. Picnics, walks, parks, that sort of thing. Other than bloody noses, grazed knees, blisters, removing dead bugs from children's mouths and hyperventilating, feet kicking, ground hitting tantrums! We have had a blast!

The icing on the big fat activity cake of summer was the school uniform shop! There is just one shop in which to purchase the uniform from and it provides its services to at least half the schools in the city!!!

There are no words to describe my anxiety levels that day. The whole procedure from start to finish can only be described as hell!

The thirty minute queue to enter the shop!

The angelic children that sat around us patiently waiting to try on their new angelic uniforms, whilst my little demons swung on the clothes racks!

The thirty minute wait to pay whilst a dance performance was offered to the customers by my three year old and my niece whether the audience liked it or not and after the dance performance both of the little demons lay down in the middle of the isle through sheer exhaustion and publically announced they were dying of thirst. The angelic children looked on.

Finally the realisation that hit me once I had got to the till, I was going to have to return my newly purchased jeans and bag or sell one of my children to be able to afford the uniform!

I do believe that the school uniform shop day has changed me as a person, in a positive way! When I am having a bad day in the future whether we are running late, books can't be found or the school requests me to dress the kids as giant Mexican space bugs for children in need day with thirty three minutes notice, I am always going to be able to think things could be worse!

The best days ( I feel like I should at least attempt to throw a little light on the situation) and there have been a few where my urge to reach for the wine was practically non existent, were the unplanned days. The sunny garden days. The lovely warm bird watching, bug spotting mornings that rolled into hot summer, water play kind of afternoons. No planning just playing! We had picnic lunches and barbeque teas and it didn't matter that they wanted to scream and dance and run around half naked! I love them days!

Even those days though were not enough to halt my day dreams last week. Imagining what I would do with those rare few child free hours. I fantasised about having my nails done or going out for lunch. Planning a social life or preparing for university next week. I could go on. In fact the reality has been I have cleared out Millie's wardrobe, sorted Leo's Lego, sent requests for special Christmas gifts to Santa, arranged trips for half term and sat outside school fifteen minutes before the gates opened because I couldn't wait to hear about the angelic fun my little demons had experienced! 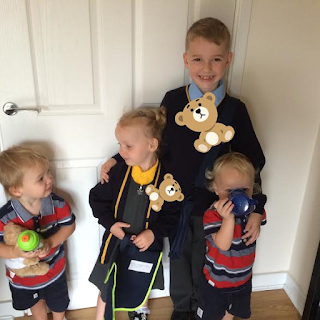