The last few mornings have been really crappy! Those mornings that you want to put your hands up and say 'I quit', 'I don't want to this anymore!!

Waking up every hour throughout the night because one or both babies have lost their dummies again and then not being able to have a cup of tea once I was up because I am convinced that sticking to this ridiculously expensive diet is going to turn me into Kate Moss's body double by next Thursday just in time for our exoctic vacation!.....(Devon) Did not make the greatest start to the day.'

I just about managed to have a shower whilst listening to a soundtrack of intermittent screams, cry's and giggles but couldn't find anything to wear as the ironing pile currently stands at approximately 5ft 6 and if its not in the ironing pile its going through its 50th spin cycle (anything to delay hanging it on the washing line where it might actually dry) 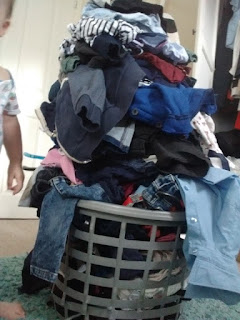 Im lucky that Leo is a little gem in the mornings (most of the time) and despite his inability to get dressed without getting distracted by the TV, a book or his latest, unique lego creation! He's pretty independent and can usually get himself sorted and ready to leave. Millie on the other hand decided to flat out refuse to get herself dressed until she had finished a fifty piece jigsaw, dressed her dolls and put them to bed. Find plasters smallenough to fit on to her perfectly, uncut, unhurt fingers!!! im sure she detects my sense of failure and no longer care attitude as her demands become greater and my ability to parent becomes non existent when her decision to take half her bedding to nursery because she is freezing (in June whilst wearing a coat) goes by practically unremarked by myself.

The babies despise getting dress but at least they have been preoccupied with the '2 for £5' stickers they had removed from their new 'holiday' tshirts. I wouldn't let the wear new clothes for nursery as a rule and usually delegate old clothes but on that morning I made an exception (ironing pile currently standing as 5ft 6)

I end up dumping everyone in the car in a fit of tantrums, Bobby's sticker had ripped. I refused to let Max bring a suitcase along and everyone decided that they all needed Millies frozen blanket as they were on the brink of hypothermia. Amongst the chorus of  I wants, its mine and arrgghs I remember that I have forgotten to bring along two bags, a signed reading diary and three spare sets of clothes but all four kids are in the car and there all wearing shoes so things could be worse!

Six days later my ironing pile now stands at 5ft 7. I'm not looking quite like the body double of Kate Moss just yet!! Millies got over her sensitivity to the cold and is wearing shorts and sunglasses regardless of the temperature and since packing for our break to Devon next week the boys '2 for £5' sticker collection has quadrupled and I have come to the conclusion that really crappy mornings are here to stay, for the rest of this week at least!