A Serial Killer in my Parking Space!

A Couple of weeks ago I made the somewhat brave decision to go and do some food shopping with our Princess and the babies. Of course I am not confined to the house when I am alone with our youngest three children but trips out are usually limited to the park or play area. Anyone who has a two year old knows that there is something about supermarkets and toddlers that don’t mix well, as soon as they walk through the front door they turn into some horrible, unrecognisable creature who most suffering parents would be happy to deny all knowledge of! This was probably not my best decision and anticipating the possible outcome of this trip put me in a questionable mood before I had even left the house.


It was early on a Friday afternoon. We pulled onto the car park of our local supermarket it was ridiculously busy. I drove to the parent and child bays but they were all full! 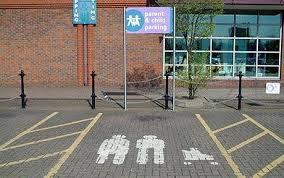 
Not only that in one of the bays a van was parked, a man was getting out… on his own!! No child!!!! I was fuming and really felt I needed to tell this inconsiderate man how annoyed I was. My plan was to shout to him through my open window…


‘Excuse me, what do you think you are doing, I have three babies with me and we need this parking space’


I didn’t shout. I stopped myself what if he was a serial killer or some kind of gangster (A bit of a random thought pattern I know but one I learned as a child when my Nannar would convince me and my sister that every single person beyond the garden gate was a child snatcher) I then had the fabulous idea of taking a picture of his van and uploading it to Facebook with an explanation of his inconsiderate actions! But quickly thought against it just to be on the safe side!


I pulled off and continued to drive around the busy car park trying to find a parking space for this horrendous, huge car that we have. That’s another thing on my ‘most annoying list’ our car! It’s more like a bus, parking it is a nightmare and Mr S notices every little scratch.   The Babies were starting to get restless and our Princess was getting agitated and wanting out of her seat. I found a couple of spaces at the far end of the car park and yes even with my questionable parking skills I would have been able to fit in them but I defiantly would not have had enough room both sides to get the babies out and there was also no place for me to safely put the buggy whilst I was transferring the babies from the car.


The next time you drive to the supermarket and decide to park in a parent and child space because you’re only going to be a couple of minutes or you only need a pint of milk or a loaf of bread, spare a thought for Mums and Dads like me who have just spent the morning trying to leave the house only to arrive at our destination to discover it’s almost impossible to leave the car!


Parent and child spaces were not designed because parents become lazy when they have had children and can’t be bothered to walk an extra few steps to the entrance. They are needed by parents. The extra-large spaces allow you to load and unload your toddlers or babies safely in and out of the car and they are usually closer to the entrance in order to avoid small children crossing a large car park. They provide the much needed extra room to erect buggies and have enough space around the car for your child to sit in their buggies without being in the path of oncoming traffic.


Baby and Toddler spaces are a godsend to me and thousands of other Mums and Dads across the country. They are one of those little things that makes life just that little bit easier. We need those spaces so please leave them for us!!!
And just in case you were wondering I did manage to get my shopping done that afternoon. After collecting my mum from work I pulled into the drop off point just outside the entrance of the supermarket and left her in the car with the children while I quickly got my essentials. I was only gone a few minutes! Surely that’s allowed? Right?