The School Run AKA Morning Madness!

Just under three years ago a school morning would be relatively easy  and straight forward. Getting one child dressed, fed and ready for school is pretty easy by most peoples standards. Add a little baby girl into the mix and although I had to up my game a little bit, especially after returning to work, it was still manageable and for the most part stress free!

Fast-forward another 18 months and the relatively simple task of the school run was a contributing factor in many sleepless nights during my twin pregnancy. I wont lie the thought of getting two newborns, a 22 month old and a 6 year old, up, fed and dressed to be at the school gates on time filled me  with fear. Fear of failure. So I did what I always did in situations that worry me, I made a plan and this was it:

This is where my plan became slightly ridiculous!


This plan has not been executed to date but hey everyone needs goals.

I am usually awake by 4am and have probably been awake most of the night. Our second little baby has his morning bottle around 4am and our first little baby has his around 5am. They both tend to fall asleep around 6am at which point I lie there  hoping the next night is going to have a better outcome and more often than not I end up falling asleep.

I usually wake up just after 7am and sheer panic sets in. WE CANT BE LATE! I manage to have a shower, get dressed and dry my hair within 10 minutes. Attempting to get Leo up has become somewhat  of a challenge on school days you can guarantee at the weekend he's up at the crack of dawn, so I spend the next 15 minutes coaxing him out of bed whilst trying to find a school shirt that’s been ironed. I'm usually defeated and have to start ironing one. At which point our Princess has decided she doesn’t need any help getting dressed and presents herself in a frozen swimming costume, woolly hat and wellies. Leo then appears one leg in his trousers asking where his school tie is and informing me he hasn’t read his school book for the 2nd night in a row. I usually attempt to get our princess dressed in 'normal' clothes but more often than not I just give in. (Self expression and all that.)

The kids sit down to eat breakfast around 8.15pm. The Babies are not even dressed. Every morning our princess asks for chocolate hoops, we have only ever had one box of these during her entire life they went down far to well. So much so that the box only lasted 2 days. When you have  four children to feed its best to buy things that aren’t on their favourites list. That way it lasts longer!! And sugar in the morning is a definite no no! 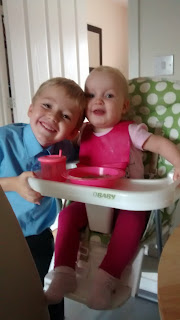 Eventually everyone settles for Weetabix. I attempt to feed the Babies their breakfast in super quick time or risk a round 20 minute trip of cry's from two hungry little mouths. By the time breakfast is finished the Babies still in their pyjamas are covered in Weetabix. Someone has spilt a drink all over the floor and the sink is overflowing with dishes. Now maths was never my strongest subject but four children should equal four bowls and four spoons right?......wrong!!! Breakfast time guarantees more dishes than any other mealtime and there is not even any cooking involved!!!


Its gone 8.30 at this point and I am starting to turn into a psychopath repeating over and over "Shoes on!!! Everyone put their shoes on!!",
So we are nearly there, we are nearly in the car. Leo is the only one who is actually dressed properly, the kitchen looks like it has been ransacked by wild animals but we are nearly out of the front door.


Then it happens I smell that smell. One of the Babies needs changing, after identifying the perpetrator I then run up and down the stairs with him under my arm frantically trying to locate wipes! After a quick nappy change we eventually all end up in the car, everyone buckled in and ready to go!
The sense of relief as I fasten my seatbelt and turn on the engine is immense, and that’s it were on our way. The Babies are quieter, of course they are! There shattered! They have been awake all night! I look in the rear view mirror to see our Princess has stolen the Babies dummies and has them both in her mouth but for a moment there is silence so as long as there is peace and quiet then its fine by me.


So we are all in the car, on our way to school fed (Well the kids are) dressed (Sort of) and looking forward to the day ahead!! Just as we pass the old pub on the corner, question time starts!! Every single morning!!!

How old will I be when the babies go to school?

Can we go bowling/swimming/ice skating this weekend?

Can we go to Disneyland/ Lapland/ The Moon???

How many days until Christmas??? ( This question has been asked at least once a week since January)

Now I know this isn’t going to win me any mother of the year awards, but most of the time my answer is 'I will see' or 'I will check'  Of course I want to have conversations with my children and fill them with knowledge, just not now and if I can get away with out hearing a WHY??? Its been a good journey!
We make it! I pull up right outside the school gate just before it closes and Leo runs to his class just in time. I have succeeded! I didn’t fail! I got to school on time!

Its certainly not the way I planned to do it but things rarely go to plan anymore and that is defiantly something we have come to live by! Getting to where we need and want  to be is still achievable and we still manage it 100%, but the journey has just become a lot more Adventurous!

Email ThisBlogThis!Share to TwitterShare to FacebookShare to Pinterest
Labels: Twins