Carrying two babies is probably the hardest physical thing I have ever had to do. I had pregnancy symptoms before I had any idea I was pregnant and to say it came as a bit of a shock when we found out is an understatement!


Having another little one was not at the top of our to do list when we got pregnant with the babies! I remember it so well, it was the beginning of February, we were getting married that December.
A beautiful winter wonderland wedding.
I had my dress.
I had my shoes.
We had booked the venue and cars.
I had also started a new job and by my standards it was a pretty good job, even if I wasn’t head over heals in love with it.
We had a little boy and a little girl! We didn’t have room for a baby!!
But after 5 pregnancy tests and a response of ‘your F***ing joking from Mr S it was confirmed. Yep we were defiantly having another baby!

Mr S was quite happy about the situation quite quickly and when I say quickly he was grinning from ear to ear within a few seconds. That’s one of the things that still amazes me about him even now, his ability to adapt to anything, he's never phased by any situation. Myself on the other hand, It took me a few hours and a lot of ‘Oh my Days’ before I eventually became excited at the thought we were going to be the parents of another beautiful little person.

My new found pregnancy bliss didn’t last long. Within a week nausea and exhaustion had really set in. Surely it was to early to experience morning sickness at least to this extent?
Now when I say morning sickness I don’t mean I was sick in the morning only or felt a little off side.


I mean I was sick really sick!!!!
I was vomiting a lot all day everyday...
Morning, Noon, Night...
I would even wake up several times to be sick...
I was completely miserable exhausted and sick!
Nothing made me feel better. The constant nausea was the most horrendous thing I have ever experienced. Those first few weeks felt like years. Most days I was so ill I couldn’t leave the house. By the time I was 9 weeks pregnant I was admitted to hospital and put on a drip because I was so dehydrated. I was diagnosed with hyperemesis gravidarum a severe form of morning sickness and unlucky for me and everyone else who has suffered the only treatment available is anti nausea medication (which didn’t work) The only thing that was more annoying than this awful condition was everyone's and I mean everyone's response ‘Have you tried ginger biscuits??’ I couldn’t watch TV, I was to weak to stand in the shower, I had lost over a stone in weight! Seriously!?! Ginger biscuits!?!
I was almost 13 weeks pregnant before I went for my first scan and for as long as I live I will never forget that moment we found out we were having twins. It was the most special, strangest, scariest, surreal moment of our lives. The sonographer declaring that this had never happened to her before and looking up at the screen to see two little wriggly babies. Mr S started to laugh uncontrollably and I cried. I don’t know why but I couldn’t stop. To be told your having twins is completely mind blowing but I would love to be able to go back to that split second and live it again. 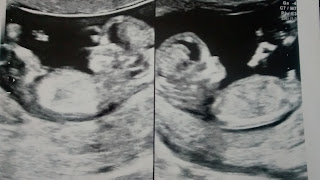 So that was it!!! We left the hospital knowing we were shortly going to be a family of six! Imagining what life was going to be like. We already had two children what difference could  two more make. I think we both thought we had a rough idea of what to expect…..
We didn’t actually have the slightest clue..